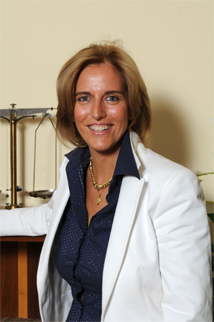 She provides consultancy and assistance in civil law litigation, mainly in the areas of national and international law of persons, family law, protection of children, succession, obligations and contracts, as well as citizenship law.

She also has considerable experience in public and private tenders and, in general, in the field of contracts with public bodies.

She works in consultancy and litigation for companies and non-profit organisations.

She has the qualification of Mediator obtained from the European Court of Arbitration and has attended the course for family mediators at the Metalogo, the Genoa school of systemic mediation and counseling directed by Lia Mastropaolo, where she's at the end of the supervising step.

She teaches European and Human Rights Legislation at the Istituto Superiore di Scienze Religiose in Genoa.
She's a member of the steering committee of the Degree council of the course in International and diplomatic science of the University of Genoa.

From 2011 to 2014 she was a member of the Management Committee of the Special Fund for Voluntary Work in Liguria, pursuant to Article 15 of Law no. 266/1991; from 2007 to 2015 she was President of the Ligurian Forum of Family Associations, where she's still operating as Past President.
She's a member of the Board of Unione Giuristi Cattolici, branch of Genoa, and of the Association Aiuto Famiglia Onlus.

She's a member of AIAF, the Italian Association of family and children lawyers.